In light of the Boston Marathon bombing tragedy, we all want to know how to help the victims and where to donate.  Today, Massachusetts Deval Patrick and Boston Mayor Menino formed The One Fund Boston Inc. to help the people most affected by the tragedy on April 15, 2013. It is truly hard to believe that something this tragic can happen on what normally is the most inspirational days of the year for Bostonians who gather to watch the runners.  I watched this race from the sidelines for many years and crossed the Boston Marathon finish line 6 years ago. 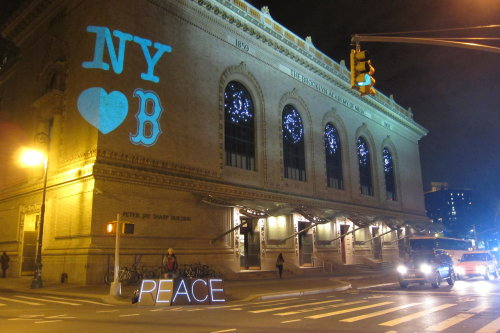 One of the many messages projected on the Brooklyn Academy of Music on April 15, 2013

The simplest thing that you can do right now is to donate any amount to the One Fund Boston here. The cornerstone donation is $1 million from John Hancock to begin helping the Boston Marathon bombing victims physically and psychologically.

The Red Cross announced that it currently has enough blood for the Boston Marathon bombing victims, however it is important to replenish the resources.  It would help the Red Cross to donate blood in the near future.

Previous Post: « How To Wear A Cropped Leather Jacket + Last Chance For Giveaway
Next Post: Win Emerson Fry Wedge Sandals + How To Wear A Baseball Cap With A Dress »