I’ve never been a lace girl, but after trying on (and wearing) a purple, strapless Dolce & Gabbana dress, clad in lace, to my interview for Miss California USA 2013, I recently fell in love!  And good thing, because spring 2013 runways were flooded with pretty lace dresses, lace overlay, lace-applique, and lace embellishments.  From Burberry Prorsum, Ellie Saab, Oscar de la Renta, and Stella McCartney to Vera Wang, Erdem, Emilio Pucci and many more favorites, spring 2013 is all about the re-emergence of this feminine detail, especially in the form of a dress.  There’s more to lace than just the lace dress, however!  This spring, try incorporating a lace top into your wardrobe or pair a lace tee underneath a leather jacket for a mix of feminine and masculine. 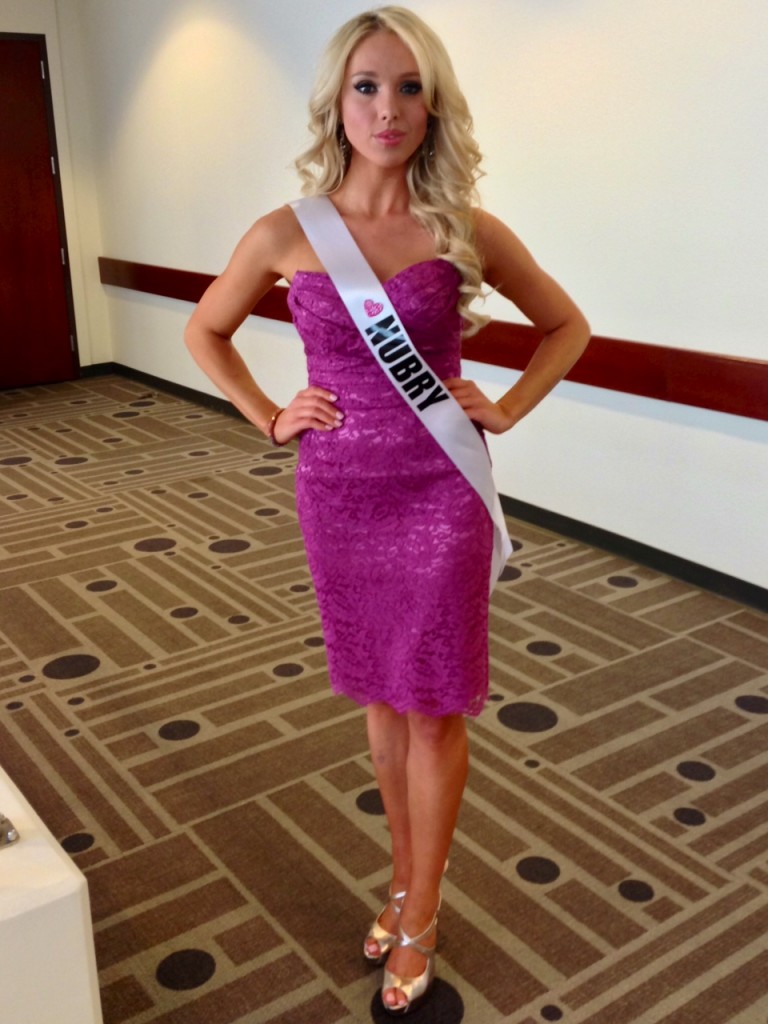 Here I am wearing wearing a strapless lace dress by Dolce & Gabbana to Miss California USA interview with the judges.

Below, we’ve spotted 10 instances where celebrity ladies are wearing fabulous lace dresses from spring 2013 “it” designer runway collections.  We’ve also shopped contemporary and designer dresses clad in lace for you to choose from for the upcoming spring 2013 season.

Keira Knightely wore a green, lace, short-sleeved Burberry Prorsum spring 2013 dress to The Tonight Show with Jay Leno on November 14th, 2012. Kristen Stewart wore a fabulous spring 2013 Erdem dress (shortened compared to the runway version) with lace overlay and neon Christian Louboutin pumps to the premiere of her upcoming film, On The Road, on December 14th, 2012 in New York City. Connie Britton appeared girly in a silk white Lela Rose dress with black lace overlay at W Magazine and Dom Perignon’s Pre-Golden Globes Party on January 11th at the Chateau Marmont in Los Angeles.  Connie wore another feminine lace dress in purple by Dolce & Gabbana (similar to the dress that recently sold me on lace!) while being interviewed in Beverly Hills for ABC’s new hit series, Nashville, which she stars in with Hayden Panettiere.

Next up, Jennifer Lopez was all smiles with her daughter Emme, wearing a deep V-neck, cream, flirtatious lace dress by Chanel from their spring/summer 2013 collection while at the Grand Palais in Paris.  Lastly, Jessica Chastain competes in a fashion face-off with Kim Kardashian, both sighted wearing a pale yellow, floral lace applique, mesh panel Stella McCartney spring 2013 dress.  Jessica appeared in the asymmetrical version of the dress at the Broadway opening night of “The Heiress” back in November 2012, while a now preggers, Kim K, recently wore the peplum version to Live! With Kelly and Michael this January 2013 in New York City.

What are your thoughts on the comeback of the spring 2013 lace trend? Is it for you?  Are you going to step out in lace this spring/summer or have you already!?  Tweet us pics or post to our Facebook page and your look might be featured this season on Nubry.com. 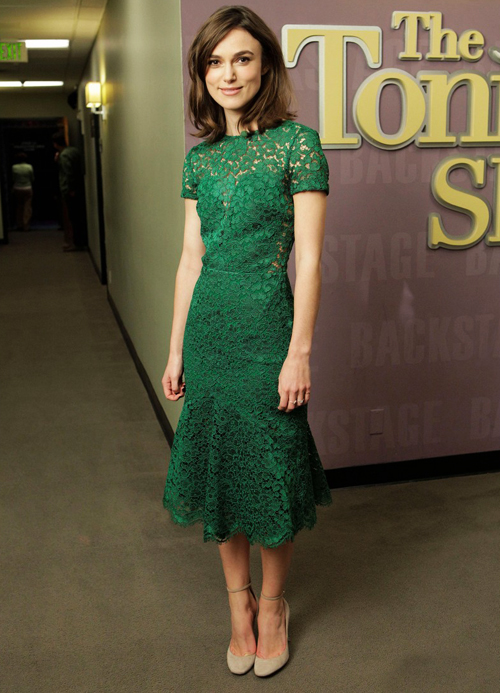 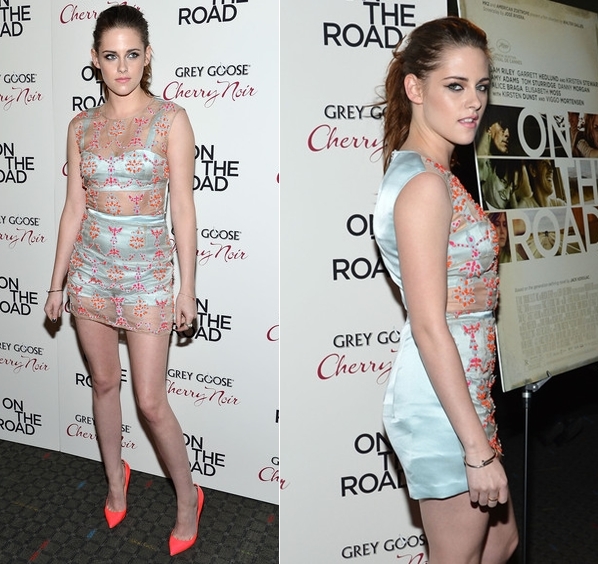 Kristen Stewart wearing Erdem spring 2013 lace overlay dress to premiere of On The Road in NYC. 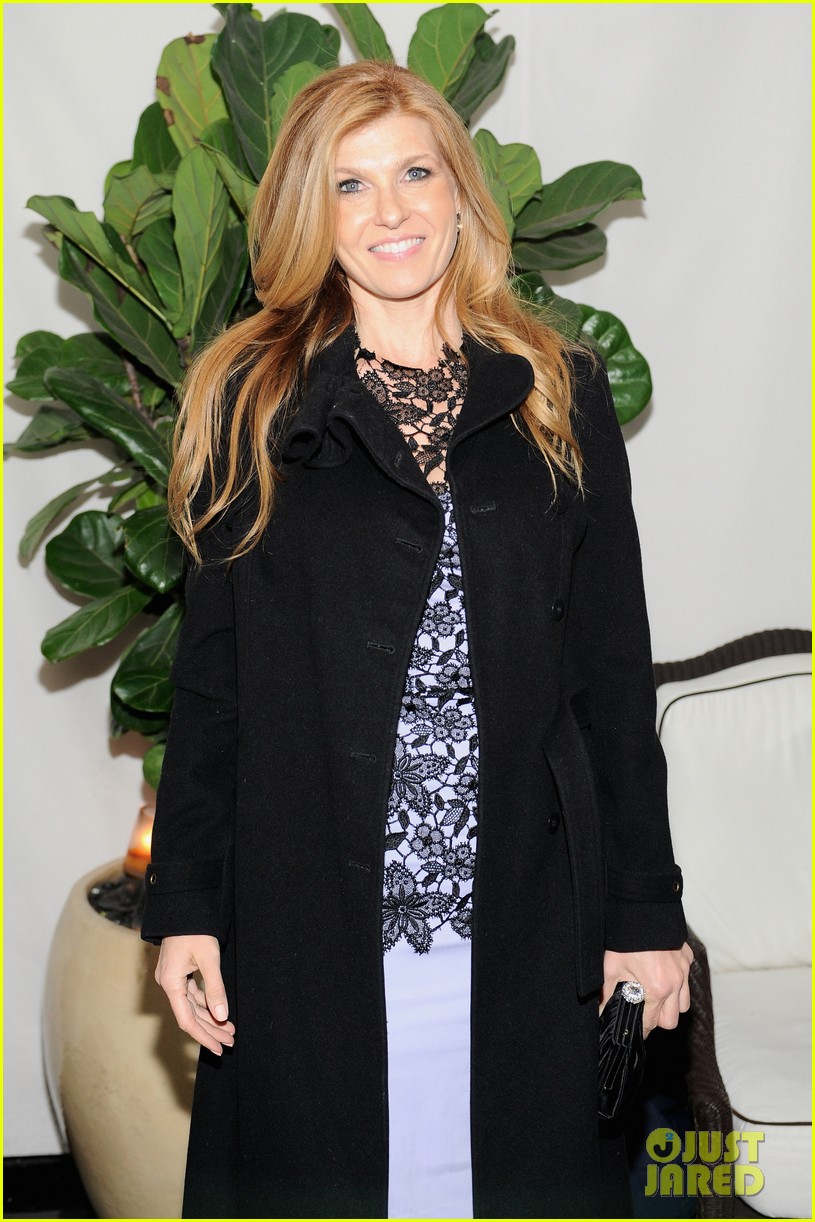 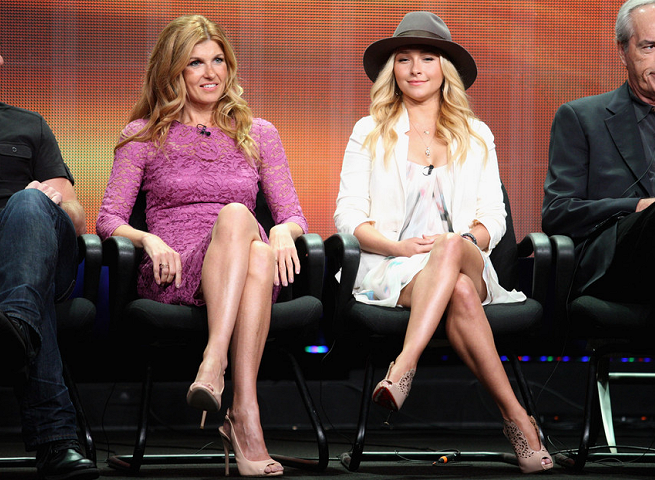 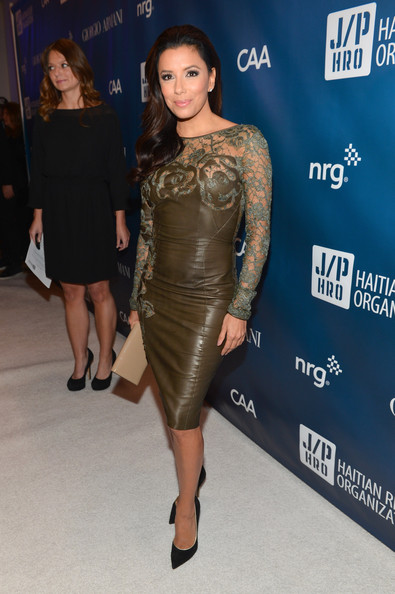 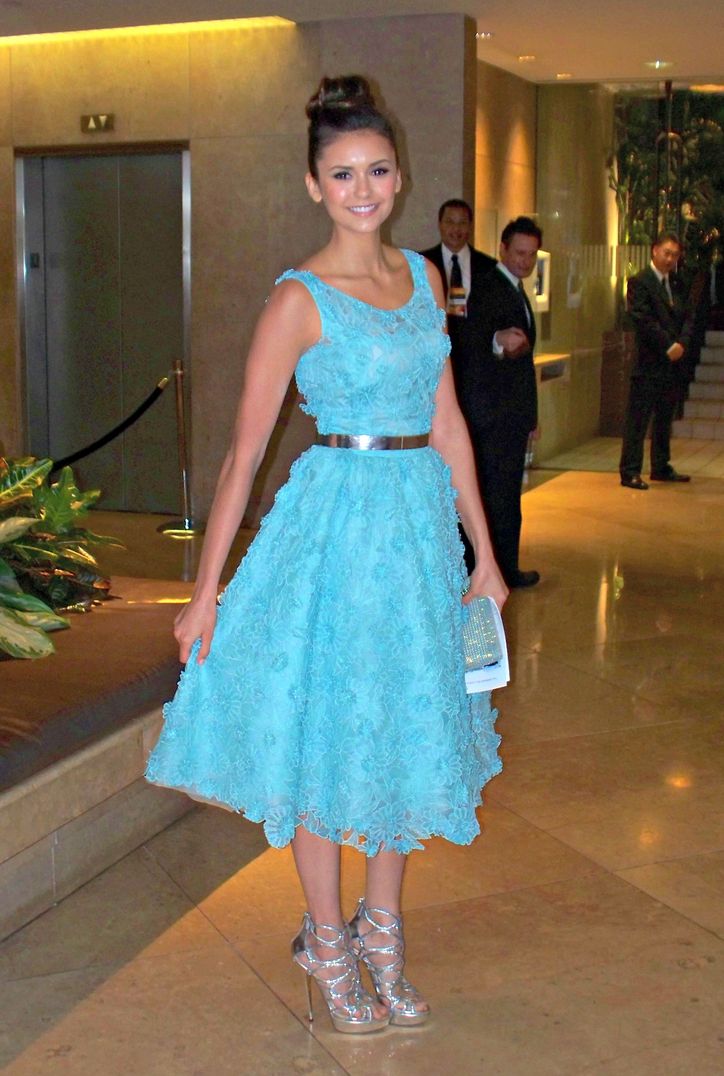 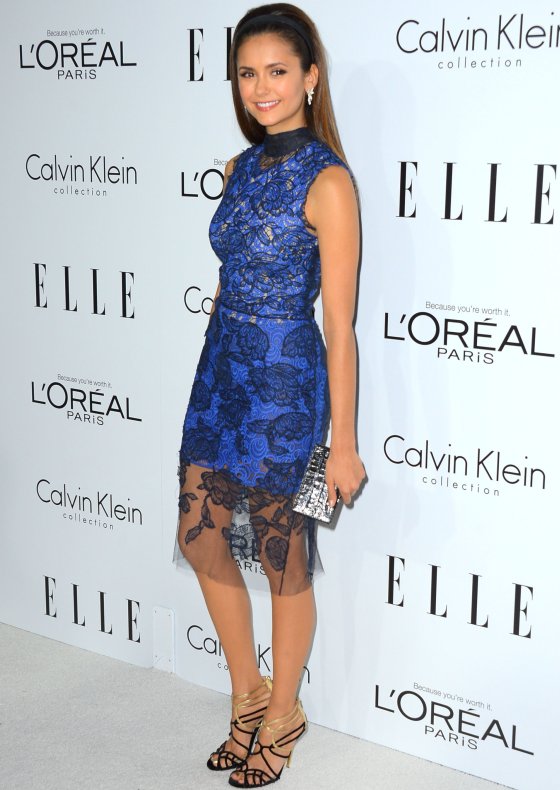 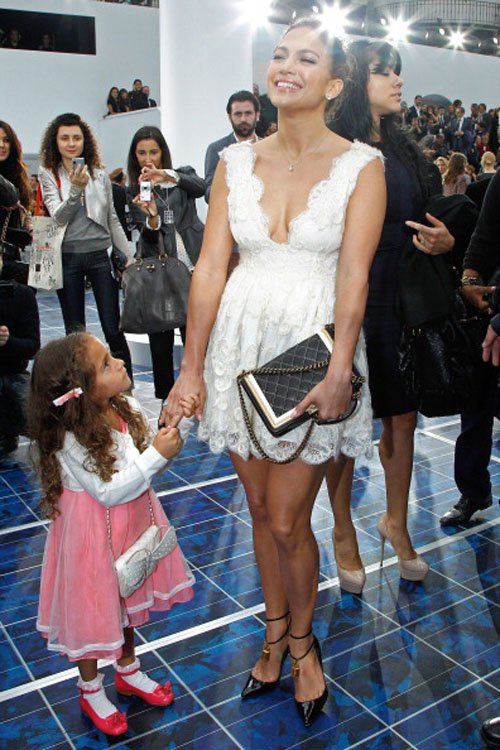 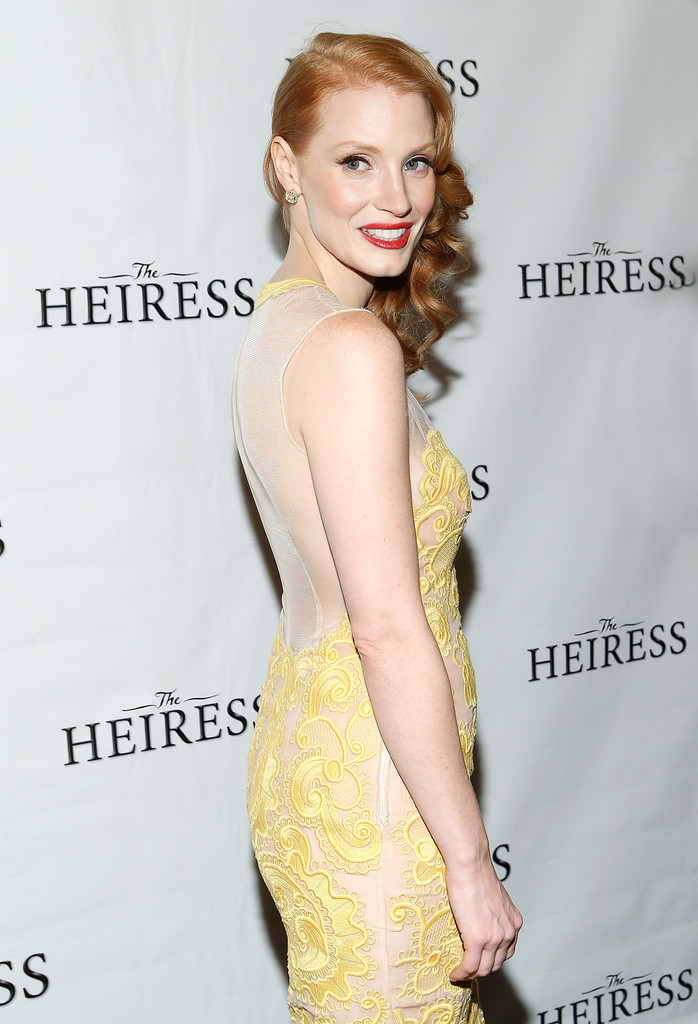 Jessica Chastain wearing a pale yellow Stella McCartney lace dress from her spring 2013 collection to the opening of The Heiress on Broadway. 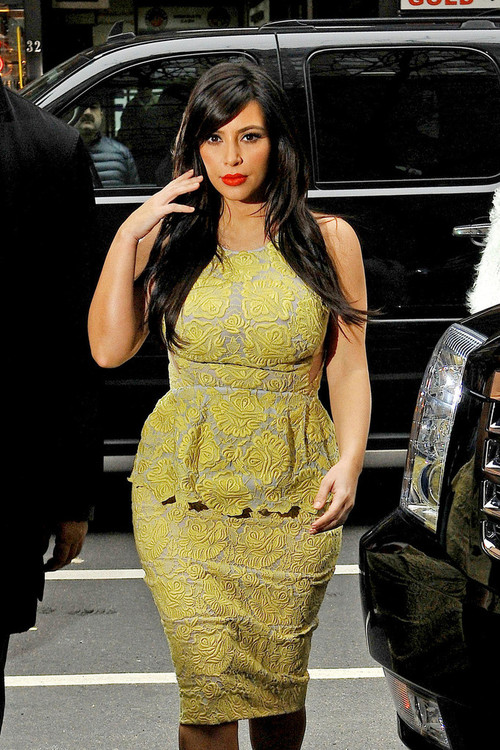 A pregnant Kim Kardashian wearing a lace, brocade, peplum dress in yellow by Stella McCartney from her spring 2013 collection to Live with Kelly and Michael in NYC.

Previous Post: « The Sexiest Ankle Boot And Why 22 Celebs Are Wearing Them
Next Post: Miranda Kerr Celebrates Australia Day On The Beach In Tulum, Mexico »