Society has led us to believe that it’s always the guys responsibility to approach a girl and ask her out.  I disagree. Below are 7 reasons why a girl can ask a guy out on a first date and its okay! While it’s totally fun to be pursued, I also think that it’s empowering to ask someone out!  Sorry, but it’s not the 1920’s anymore.  This is 2013.

1. Confidence is Attractive:  We want a guy who’s confident (not cocky because arrogance is lame), so shouldn’t we be confident?  Think about it… Guys fear rejection, too.  If you’re confident it’s going to be a super attractive quality to the guy you’re asking out!  Now, there is a difference between being confident and being pesky.  If you ask a guy out and he says no, DO NOT ask him out again.  If he’s truly interested, he’ll make the next move.

2. It’s Okay To Have An Entourage: I’ve been on my fair share of first dates, and typically I know pretty soon whether or not I’ll say yes to a second.  But, to be honest, first dates are normally a little bit awkward.  Both parties are a bit more reserved and there are all these stupid rules about what you can and can’t say.  That part is hard for me since I often times say all the things I’m not supposed to.  Oops!  A girl can ask a guy out with you and your friends.  That way he can bring a friend or two and you can all go out and mingle.  I’m always a little bit more myself when I’m in my comfort zone.  Being around your friends alleviates pressure, allows you to be more of yourself, and that way you can get the yay or nay from your friends.

3. Women Should Take Charge: Why not be in control of your destiny?  There’s no point in sitting around wondering if a guy is going to ask you out.  If you really want to go out with him, just ask. A girl can ask a guy out!  If he’s not interested at least you’ll know and won’t be wasting any more time sitting pretty and wondering.  You’ll also have control over the date/hang out and will be able to make decisions on what you want to do and where you want to go.  This gives you a chance to show your creativity and plan something fun for you and the guy you’re into!

4. You Might Have Extra Tickets:  If you have a date in mind, or a specific event where you know you want to invite a special someone, just ask.  If they don’t want to go they are missing out and you can always take a friend.  You can always play it off and say, “I’ve got this extra ticket to this concert if you want to go.”  The fact that you had the choice of taking anyone and you chose him will definitely make him realize you’re a girl that knows what she wants and isn’t afraid to go after it.  That way you’re going and doing something fun that you’re both interested in.  However, if you’ve got a black tie event or something work/family related stick to asking your friends or going solo. A girl can ask a guy out for casual events! Ball gowns probably shouldn’t be worn on a first date.

5. It’s Not That Serious: I mean, let’s get real.  It’s not like you’re asking the guy to marry you.  If anything you’re asking him to a concert, a movie, a basketball game, or to dinner and drinks with friends.  Those are all fun things, and when you’re in your comfort zone you’ll be able to let your awesome personality shine through.  My guess is that he’ll probably be the one asking for date #2! 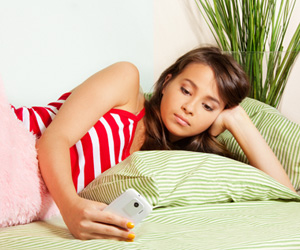 6. Guys Can Be Shy: Guys can be shy or intimidated.  A lot of people might say that if the dude is continually texting you but not taking the plunge by asking you out, that he’s just not that interested.  In many cases, that’s definitely true.    But how are you going to be sure unless you take the initiative to find out? With texting being the way that most guys communicate with us these days (which is stupid because we should just pick up the phone and call each other), it’s better to ask to hang out and be blown off instead of continually texting him and wondering if he’ll ask you out.  That way, if he says no you can move on and quit wasting your time wondering if he’s into it or not.

7. Guys Get Bored: You thought texting was for girls? Well, guys text alot! Do not let texting become your destiny! It’s absolutely likely a guy that continually texts and does not ask you out is just bored and wants someone to text and pass the time. Don’t fall victim to the infinite texting train!

Just remember, act with confidence and know that you deserve the best.  Don’t be afraid to go after what you want!  If it works out, you’ll be happy that you took initiative and you’ll weed out the dudes that aren’t worth your time.