The newest online dating site is actually an app! Tinder is the newest dating app that people are moving to faster than Facebook! I have put together a guide on how to successfully use Tinder and score a first date or just a good match including ultimate Don’ts! After talking to a bunch of different guys and gals that use the Tinder App to meet people. If you follow these rules, you are bound to be on top of your Tinder game or at least get a few free meals and have some funny stories to share with your friends.

1. The Art Of Swiping: Be careful with your swipes!  You can’t go back once you’ve swiped left and you don’t want to swipe left on Prince Charming. Don’t get too fast or too efficient with the swipes! For those of you unfamiliar, a swipe to the left immediately dumps a guy and a swipe to the right says yes!

2. It’s Not Marriage, Its Just A Scuba Dive: I always think it’s a good idea to click through every single picture.  What if someone’s first picture is lame but in their second picture they are doing something really cool?  Even if he’s not the guy you’re supposed to date or marry you could end up with a fun friend to go sky diving or scuba diving with.

3. Pictures Are Important:  Remember, you are being judged based on appearance so it matters what you have in your pictures.  However, keep a little for the imagination! A lot of my friends have told me that they aren’t into the shirtless mirror selfies.

4. Groups Shots: Everyone hates group shots.  We don’t want to have to scroll through 5 pictures full of dudes to figure out which one you are.

5. Baby Shots: Do not post a photo with a baby unless you’re a single dad. We will assume it’s your baby, not your niece.

6. Bikini Shots: Girls, don’t post pictures of yourself in your bikini from when you were 17.  You might lure a guy into meeting you that way but it’s not going to play out how you want it to if your pictures are deceiving.  Just be honest!

7. Do Not Lie: Don’t lie about your name, your age, or your photos! If you have the wrong age listed, this is only going to turn badly.

8. Taglines Not To Use.  “Will you be my Tinderella?” is probably the most overused tag line and really isn’t that clever.  Also “We can lie about how we met,” is lame because if you’re embarrassed to be on tinder you should probably just delete it.  There’s nothing wrong with putting positive energy out into the world by tindering and trying to meet people.  Not to mention, it can definitely boost your confidence when you’re a match with a total hottie.

9. Friends On Tinder:  Don’t swipe right on someone that you know in real life, but don’t like them. Just because they are your friend and you have a million mutual friends.  What if that person actually has a crush on you, and then you crush their dreams?  Breaking hearts on Tinder is super uncool. 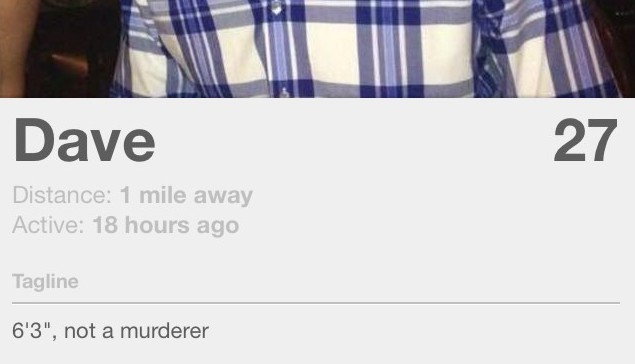 Easily the best tagline I’ve seen in quite some time.

10. Ex-boyfriends: You should probably swipe left on any ex.

11. Sleazy Pick Up Lines: If someone says something sleazy right off the bat, utilize that block button.  With any dating site, there are going to be people that just want to get laid, but if that’s not what you’re looking for then block the guy.  Even if he’s a tall glass of water, if he says something seedy he’s definitely just trying to get you in bed.

12. Opening Remarks: On that note, come up with a better opening line.  Don’t just say “Hey, what’s up?”  That’s boring.  Make me laugh somehow and be creative.  And ladies, if a guy says something funny/charming have the courtesy to write him back! 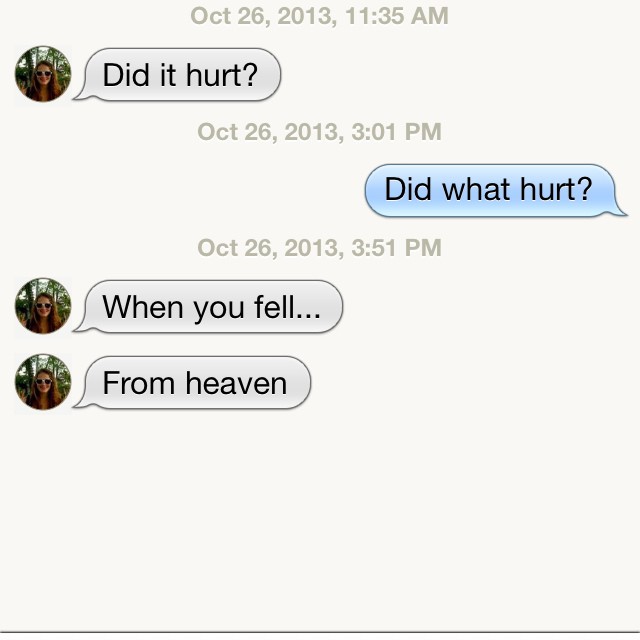 I mean, that’s definitely cheesy but at least he’s trying

14. First Date Creativity: Guys, don’t just suggest drinks for the first date.  Be inventive and creative.  Girls like that…well sometimes! As a girl, I’m not going to meet you in Tahiti for a scuba dive, but maybe on date #2.

15. Lengthy Tindering: At a certain point, exit the app and enter the next step…texting! If you are going to send novel length messages via the app, you should probably just ask for their number.

16. Phone Calls: And the next step is a phone call! Just because technology is making dating easier for us, it doesn’t mean that chivalry has to be dead!

17. Meeting in Public Places: If you get to the point where you think you actually want to meet this person, do it in a public place.

18. Stalking & Creeping: Before you meet them, get their last name and I suggest Facebook creeping and googling.  You can never be too safe.  It’s also smart to bring a friend along if the first date is something casual like grabbing a coffee or a drink.

19. Dinner Dates:  If someone asks you what you want to eat for dinner and you say “I don’t really eat carbs, so some protein and a salad would be nice,” and they take you to a pizza place that doesn’t serve greens– you should probably excuse yourself from the situation right then and there.  That actually happened to me, and it was really awkward.

20. Be Friendly: Be open and friendly to meeting people.  Even if you don’t hit it off with one of your matches, they could be perfect for one of your friends. 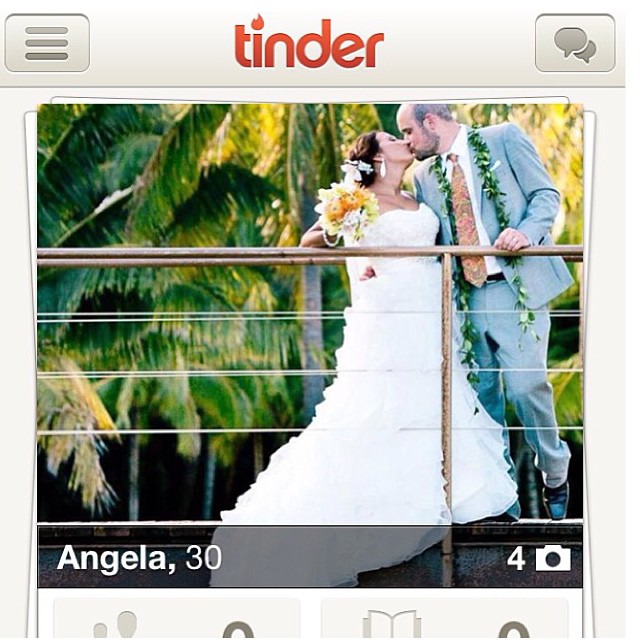 Don’t Tinder if you are in a relationship or married!

21. Take Control Of Your Phone: Don’t let your friends Tinder for you.  Otherwise you might wake up with 99 new matches that aren’t any good.  That’s also happened to me.

22. Tinder Is For Singles: Don’t Tinder if you’re married or in a relationship.  Sounds like a no brainer, but apparently not to this girl.

23. Overanalyzing: Just like any other dating site, it’s possible to know when someone has last used their profile.  Be sure not to over analyze or ‘creep’ and get yourself all worked up over nothing.  At the end of the day we’re all just looking for love and trying to swipe our way there.

Previous Post: « 5 Noon By Noor Tops Show Small Midriff Without Skin Including Peplum
Next Post: The Drop Waist Dress: How To Wear This Season »